INAUGURATION OF NEW SECTION OF LINE 5 OF BUCHAREST UNDERGROUND

Top public office-holders were in attendance. Raul Doamnei-Eroilor section was opened to the public on the same day

Bucharest (Romania) - The ceremony for the completion of works on the new Line 5 of the Bucharest underground was held on 15 September 2020. The new line became operational and was opened to the public in the early afternoon of the same day.

The inauguration was attended by the President of Romania, Klaus Werner Iohannis, the Prime Minister, Ludovic Orban and the Transport Minister, Lucian Bode who took part in the opening journey together with Astaldi’s management.

The works were commissioned by Metrorex, the company responsible for operating Bucharest’s underground lines, and 85% of finance for the project came from European funding (Regional Development Fund - 2007-2013 Operating Programme for Transport Sector and Cohesion Funds - 2014-2020 Operating Programme for Major Infrastructures). The project was performed by Astaldi (leader) as part of a joint venture with FCC, UTI and Activ.

The Raul Doamnei-Eroilor project entailed the construction of approximately 7 km of the line, with 10 stations including the Valea Ialomita depot station. The new underground improves the connection between the south-west of Bucharest (Drumul Taberei district) and the city centre, with a significant reduction of private surface traffic. The trains travel at a speed of 80km/h, with a minimum interval of 2 minutes, thus cutting the time to travel from the south-west suburbs to the city centre from 32 minutes to 12 minutes. The new line was designed to maximise energy saving by using latest generation systems that allow for consumption to be decreased by approximately 30% compared to the city’s other underground lines.

Inauguration of the new line came at a time of difficulty and apprehension caused by the COVID-19 pandemic. Through the staff of its Romania Branch, Astaldi took action to reduce the risk of infection to a minimum in both its offices and worksites in Romania, implementing ministerial prevention measures and deciding, at its own initiative, to perform preventive testing with over 2,000 swabs being taken. This made it possible to neutralise possible hotspots that could have caused a slowdown in the performance of works.

Astaldi is set to become part of Webuild thanks to Progetto Italia, creating a leading Italian player in the infrastructures sector. The success of the new Line 5 of the Bucharest underground consolidates the new Group’s international vocation as a contractor able to safeguard employment levels, achieve results and contribute to the development of infrastructures in the countries it operates in.

Astaldi has been a player in Romania since 1991, for almost three decades during which it has already built more than 100 km of railway and underground lines, 250 km of roads and motorways and 2 international airports (Henri Coanda in Otopeni, Bucharest, and Avram Iancu in Cluj-Napoca). It was responsible for the impressive cable-stayed Basarab Overpass (which, to date, has meant a saving of 15,000 tonnes of CO2), the extension of Line 4 of the underground, the Piata Sudului Underpass and the Lia Manoliu National Stadium. At the present time, it is involved in building the urban penetration section of the A1 - Ciurel Motorway in Bucharest, which comprises three sections, the first of which will be operational by the end of this month. While in the rest of the country it is working on Section 5 of the Sibiu–Pitesti Motorway, Curtea de Arges–Pitesti Lot, the suspension bridge and relative link road over the River Danube near Braila, three lots of the Frontieră -Curtici-Simeria double-track railway line, measuring 120 km, and it has just completed the Ogra-Campia Turzii motorway section which will be inaugurated in the coming days. 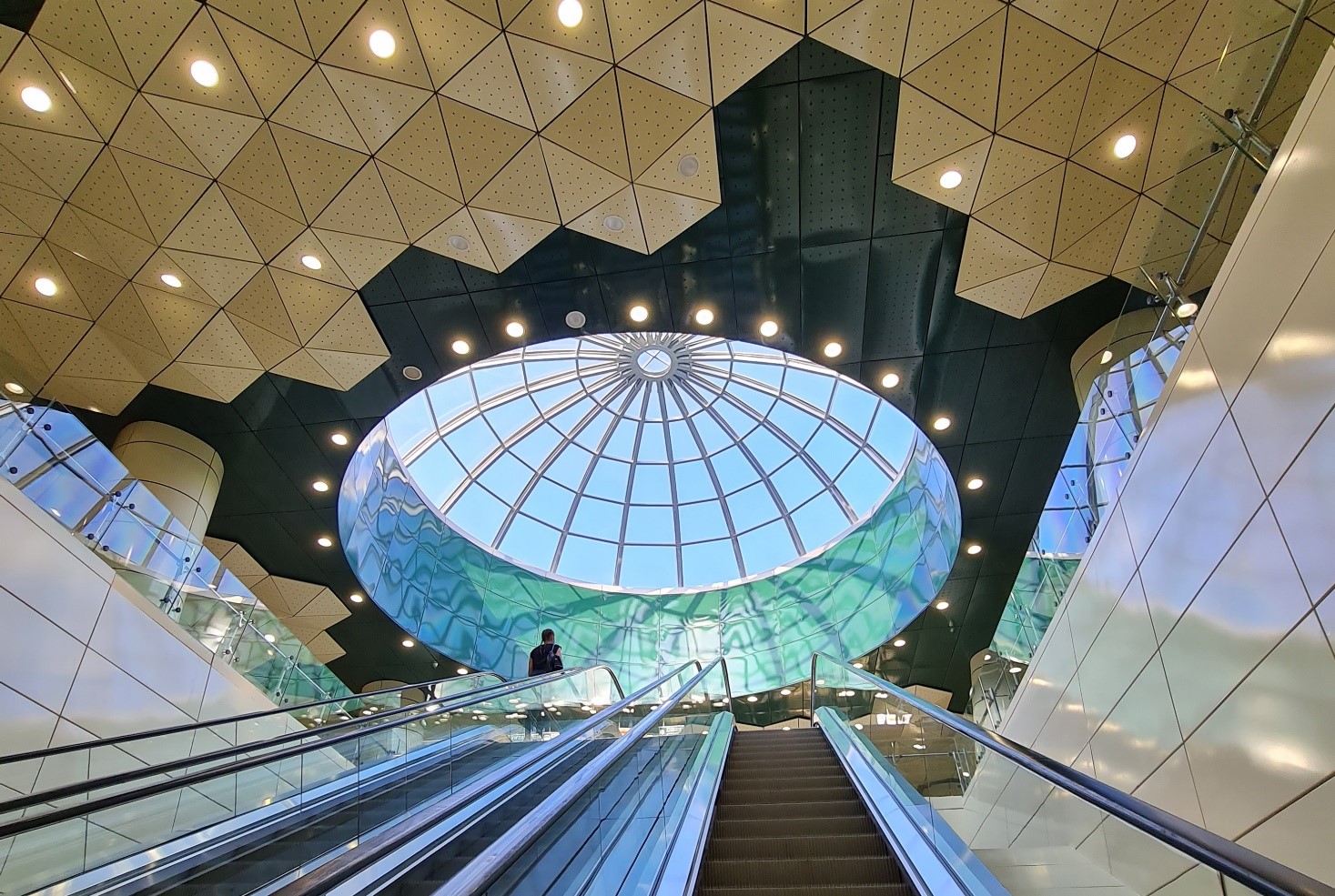